Early morning starts are getting easier. On Sunday, May 1st, dawn was just breaking as Phil and I headed up-island, once again on our way to a seldom-summited peak. We had great expectations for the day, and the weather was in great shape. Adding to the excitement, we were riding in the new Explorington mobile: my 2004 Jeep Liberty. Little did we know, we would be putting it through its paces on this trip!

There are limitless opportunities to find adventure on Vancouver Island. Currently, Phil and I are on a quest to climb every one of the 292 peaks listed in Philip Stone’s book, “Island Alpine”. Some are easy, some challenging, and others difficult to access due to gates, terrain, or seasonal conditions. Working towards this goal means that sometimes, we have to drive a long way. Today would be one of those days, but it was definitely worth it! 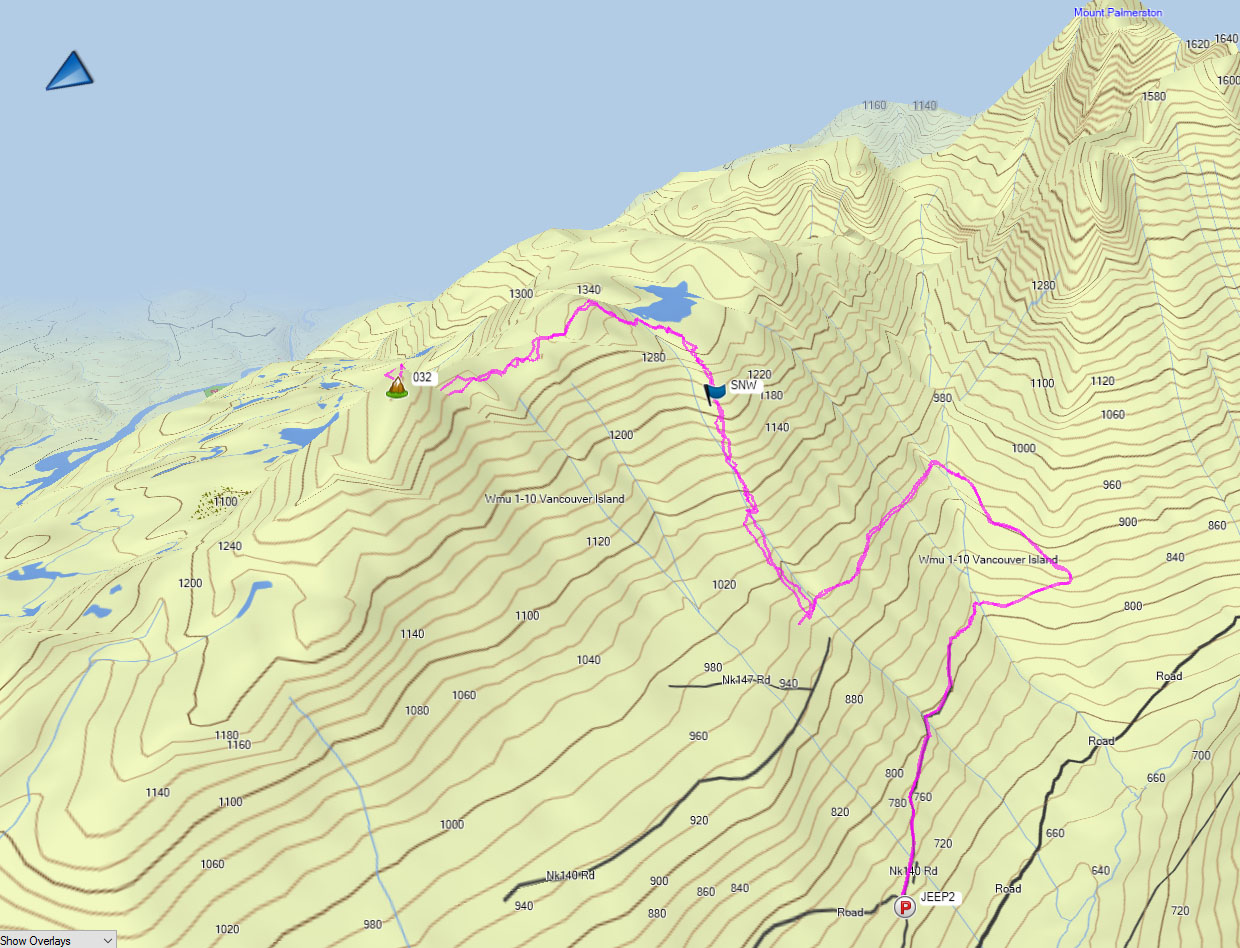 At KM-marker 260, we turned off the highway onto the Eve River Main. We scooted along the smooth logging road, then turned left up Palmerston Road. The fun began here, with a series of crossditches! Fortunately, they were small, and the Liberty easily navigated through them – but only ten minutes up the spur, we hit an impassable obstacle: three trees lay across the road. We quickly cut through the two smaller trees with my handsaw, but the larger tree was wider than the saw blade. Next, we attempted to haul the tree off the road with a section of webbing. With the Jeep in 4-Lo, we slowly crawled forward, until – SNAP! Unfortunately, the straps didn’t even rock the log out of position.

We abandoned our original trip plan and set our sights on Plan B: Cedarstedt Mountain, in the same range. Reportedly, this mountain is an easier climb than our first goal, but it is not often summited, because the approach is terrible. We continued down the Eve River Main, then turned onto the Naka Mainline. At first, we wondered why so few people climbed the mountain; while the road was bumpy, it was far from the worst we had ever driven. However, once we turned on to the Naka 100 Road, we encountered at least two dozen car-sized crossditches. Again, the Jeep munched them handily. 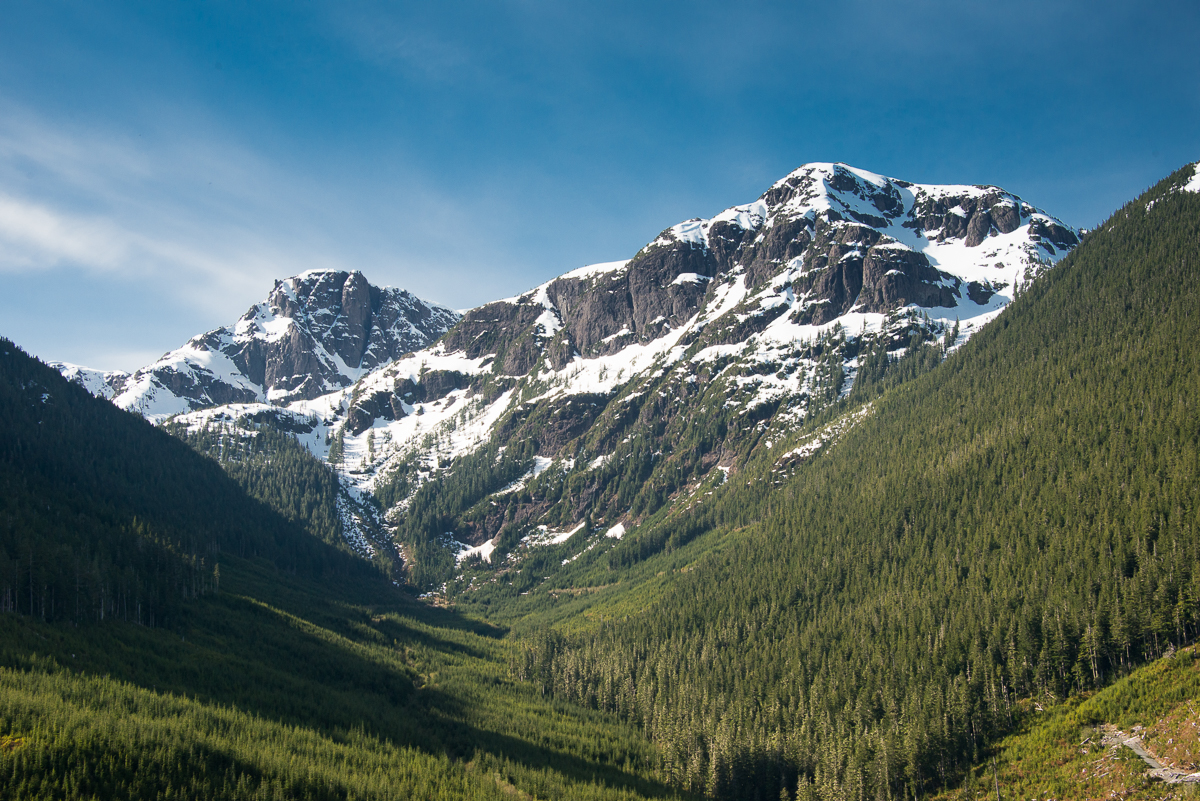 Progress was slow and steady as we climbed. Turning onto the NK140 spur, we continued up the road, paralleling the river valley below. We could see the source of the river, and Mount Russel loomed in the distance, with epic-looking cornices hanging over the edge of the summit ridge. Eventually, we reached a washout that was just too gnarly – no vehicle, not even an ATV, would make it past this point. We parked the Jeep and started hiking (~720m). The early morning start had forgiven us the wasted time on Palmerston Road, and we were walking by 9:00 am.

We had four kilometres of logging road to hike before we hit the trees, and the views of Mount Russell and Mount Palmerston made the walk almost enjoyable. As we walked, Cedarstedt was on our left (east), well above the clearcut. We never even considered trying to take a shortcut through it, as it looked too bushy; the road was the best route.

We walked the long dry road to the base of Mount Palmerston, and followed as it cut back and gained elevation. Eventually, we were backtracking – toward the Jeep, but high above it – as the road contoured the mountainside. Even in the earliest part of the day, it was hot: the sun blazed down on us, and by the time we reached the trees, we were dripping with sweat. 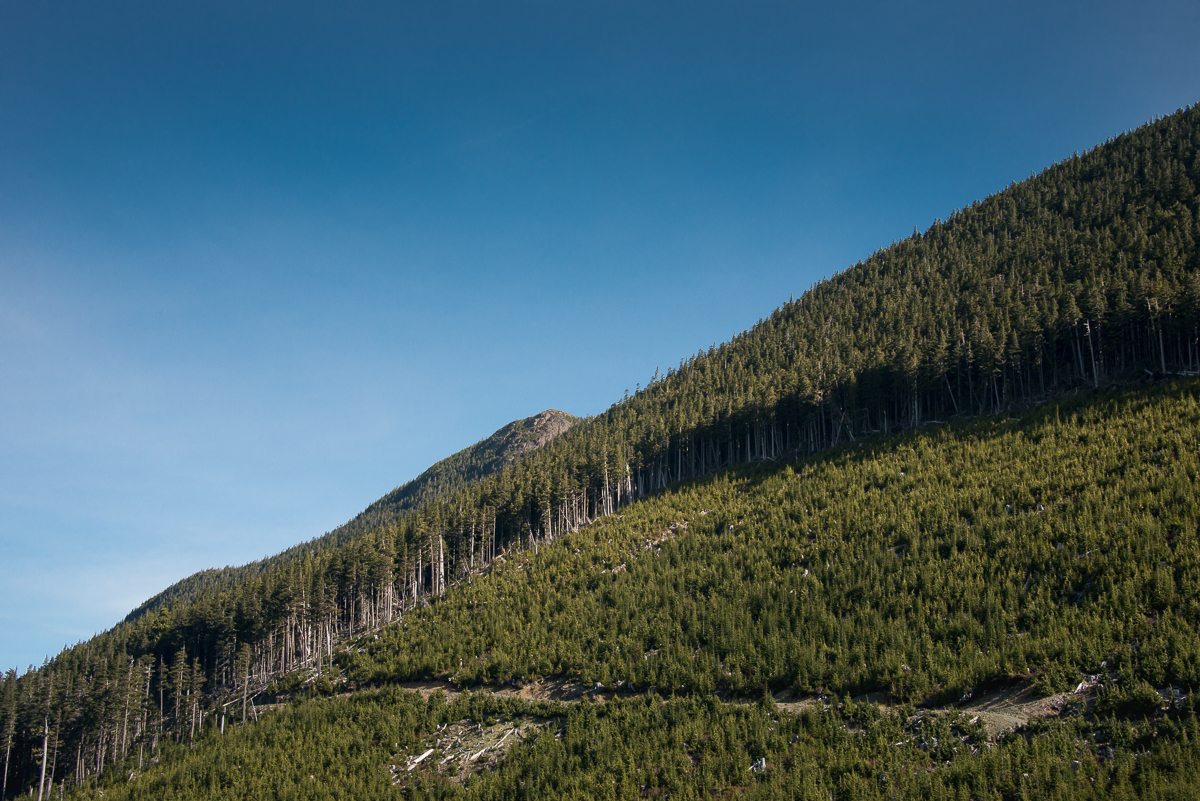 We took a reprieve from the sun in the long shadows created by a section of mature forest that reached the road (~950m). Examining our topo maps, we took a gamble and headed into the forest. The gamble paid off: in only a few moments, we were off the parched road and walking the steep open terrain between hemlock, fir and cedar. We followed a rough elk trail that wended steeply up the slope. As we hiked, we kept a small watercourse on our right, seeking the lakes on the plateau above, and eventually crossing the stream (~1070m). We were shocked to find a ribbon dangling in the creek, dated just two days prior. Obviously, this section of the forest is slated for harvesting – we were lucky to fit this hike in now. I anticipate that the Naka 100 will soon be repaired, which is good news for those who want to do this trip. Once across the stream, we followed a beautiful set of rock ledges that created an ideal series of switchbacks. The climbing was quick and the ground clear of debris, and as the ridge line came into sight, we hit the snowline (~1,200m). The snow was in good condition, so we kicked steps and hauled ourselves between the trees to reach the plateau. Reaching the open sky, we inhaled deeply as we took it all in.

We continued north to gain a ridge that overlooked the landscape. The plateau is perfection, seemingly designed to fulfill all the criteria of a beautiful walking ridge. The stunted hemlock dotted the alpine landscape, bare rock poked up through the broad swaths of snow that still blanketed the region, and we glimpsed an awesome snow-capped alpine lake, with dark lines betraying the melting surface. All of this was made even more perfect by the 360-degree views of the surrounding landscape. We could see the Johnston Strait, the Coast Mountain Range including Mount Waddington to the east, and, to the west, the ranges of peaks that just begged to be climbed.

We walked over bare rock, snowy slopes, and through some light bush on the final push to the summit. Phil and I always manage to find some fun, and today was no different: we took the direct route, and scrambled up some rocks and through dense bush, rather than navigating around the longer but easier route. The upper ridge is just as beautiful, spreading out in both directions. We turned to examine the route we came from, and paused for another long breath.

We looked at our destination to the north, a large cairn marking the highpoint. Several bumps stood between us and our destination. Fueled by the amazing views and bright weather, we bounded toward the summit, easily navigating around rocks and trees to reach it by 11:30 am, just in time for lunch with a view. 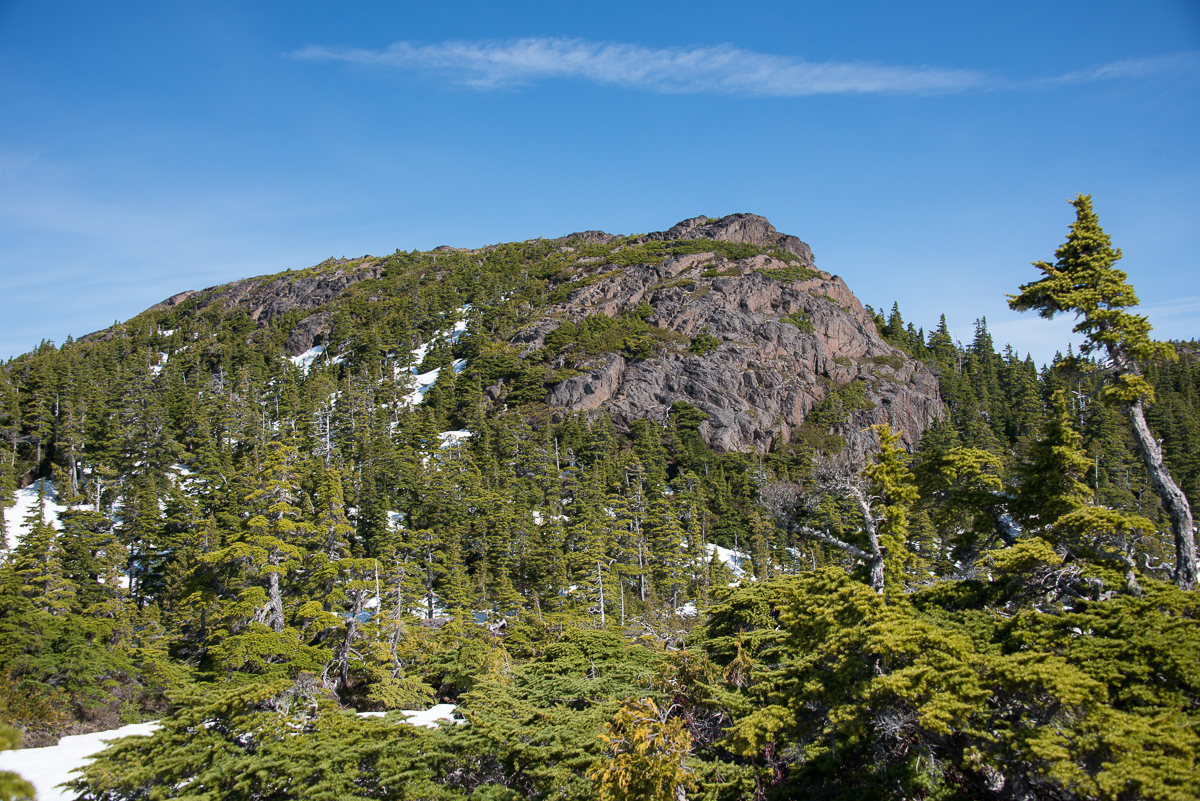 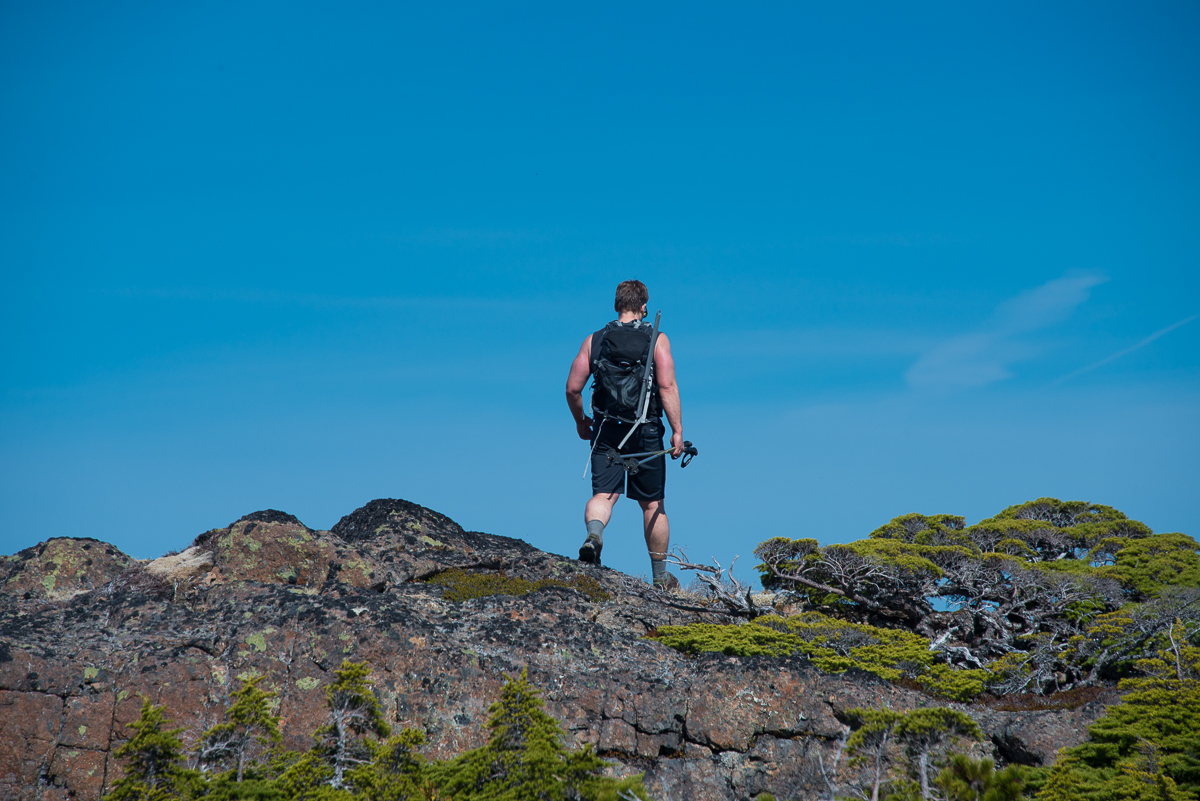 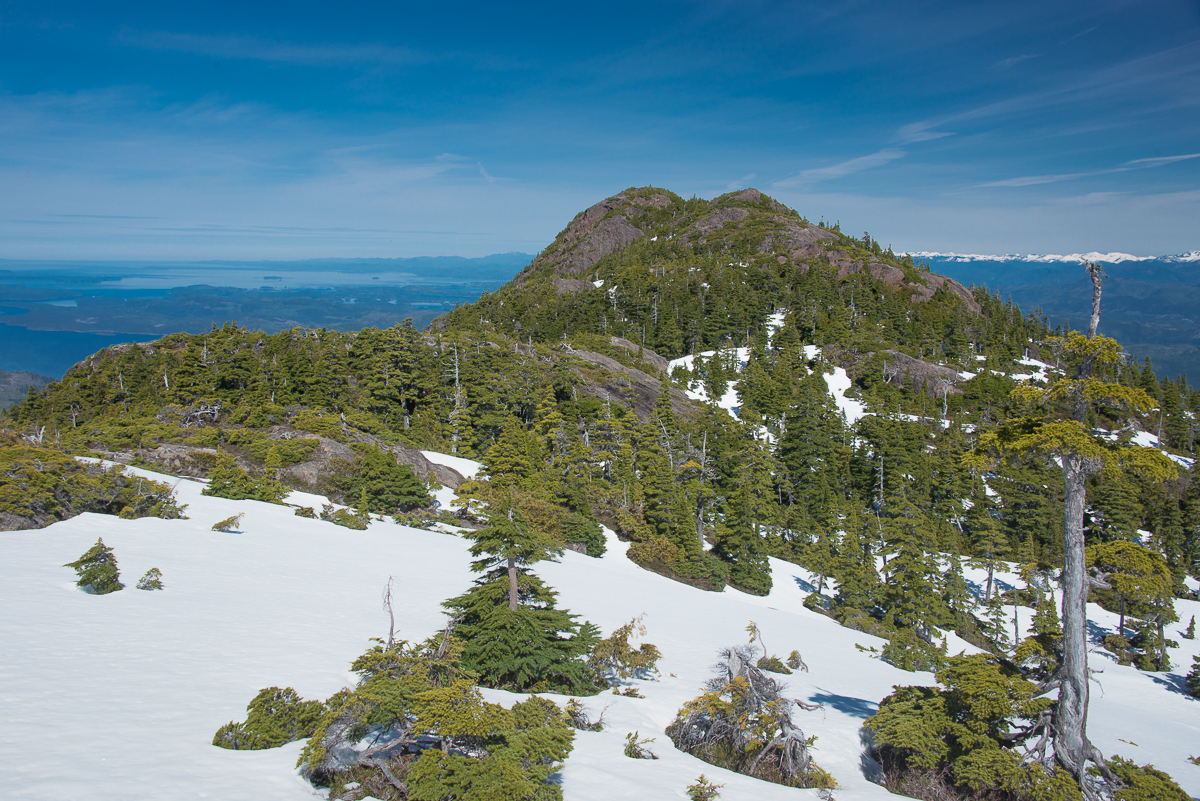 We soaked up the sun as we sat and admired the world around us, spending at least half an hour simply chatting and admiring the view, including the boats racing in the Johnston Strait below. We could have happily stayed up there for hours. Phil pointed out the distinct absence of sound pollution – there was no road noise, not even airplanes overhead. This was a rare treat; even in the heart of Strathcona Park, we usually hear airplanes and helicopters. 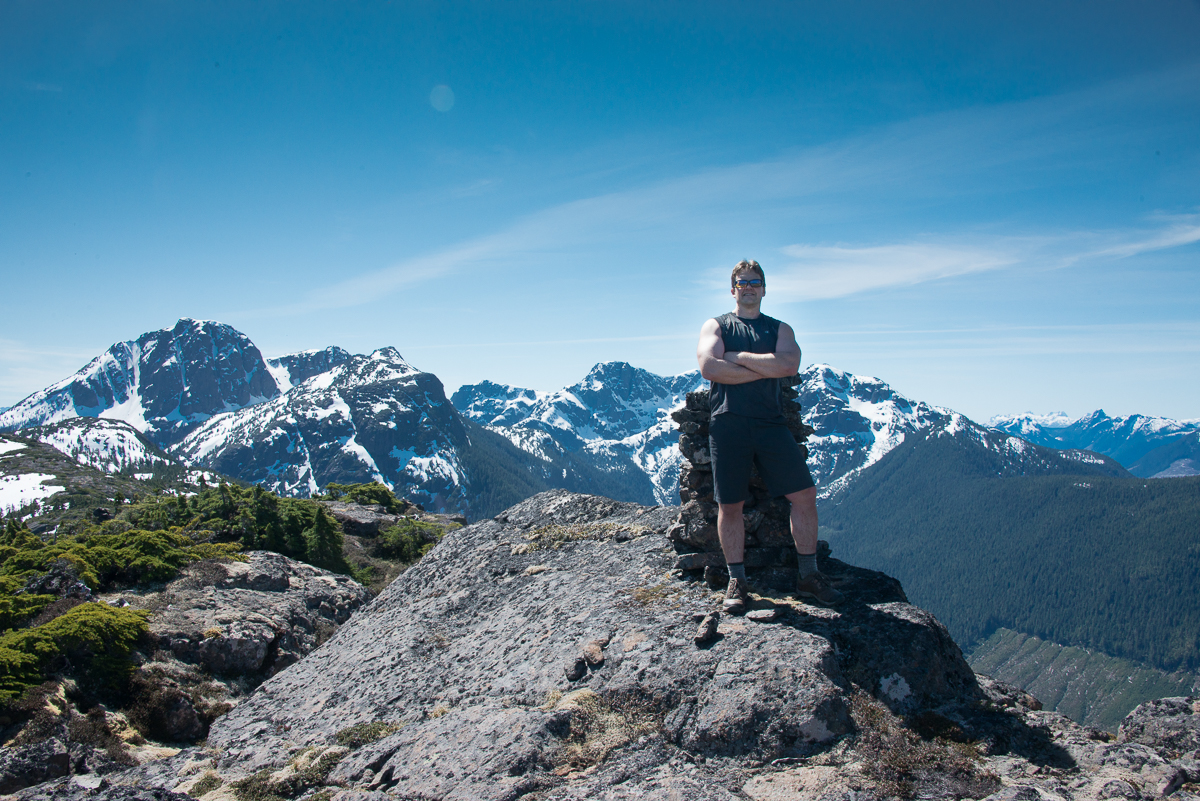 As we left the summit behind us, we talked about coming back and visiting again before the trees are hauled away. Once back on the logging road, we contemplated cutting straight down through the planted regrowth of old logging slash – but we shook our heads and simply walked the road. We were back in the Jeep and navigating the epic cross ditches before 2:00 pm.

If you are considering this trip as a destination, bring a 4×4 – and do it soon. Once the lower trees are hauled off the ridge, you will need to either walk through the slash or follow a much longer route up the ridge.

Mount Arrowsmith – My Mouth Is Full

Sutton Peak via the West Ridge

This site uses Akismet to reduce spam. Learn how your comment data is processed.